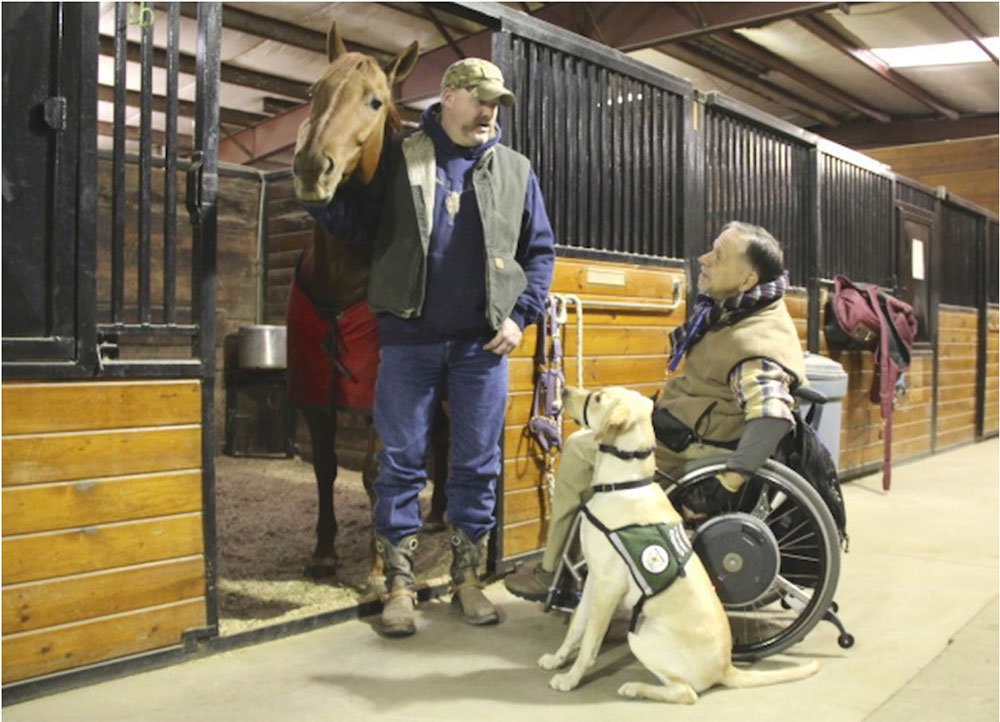 A program that uses horses to help heal injured military veterans is getting closer to forming the partnerships it needs to start taking in large numbers of veterans.

But even in the limited number of sessions it has offered veterans in its first year, the Horses Spirits Healing program at the Intermountain Equestrian Center north of Billings has seen some
gratifying results.

Paul Gatzemeier, president of the program’s board, said one veteran who came to the center this past summer was in a
wheelchair, rarely spoke and could only move his head and one hand.

By his third or fourth visit, Gatzemeier said, the veteran was grooming a horse and talking freely with staff members.

The Intermountain Equestrian Center at 7256 Highway 3 (6.5 miles past Zimmerman Trail, on the west side of the road) is having an open house for its Horses Spirits Healing program this Saturday.

Open to all, the event will include a lunch from noon to 1, catered by Kennedy’s Wine Mart and Deli, lesson demonstrations from 1 to 2 p.m. and a tour of the facility and question-and-answer session from 2 to 3. Call 245-4076 for more information.

“Horses and people—there’s a unique relationship there,” board member Matt Sampley said. Sampley is an Air Force veteran and a volunteer and veterans liaison at the center. He also holds bachelor’s degrees from Rocky Mountain College in business management and equitation training.

He said he feels his own stress and worries melt away when he’s at the center working with horses.

“For someone who’s never been around horses, to establish that relationship, that control … it’s huge,” he said.

The Intermountain Equestrian Center, just off Highway 3 about seven miles north of Billings, has been owned by Gatzemeier and his wife, Barb Skelton, since 1999. Rocky Mountain College has used the center for its equine studies program since then, and since 2006 the center has been home to organizations that offer equine-assisted activities and therapies.

Horses Spirits Healing was established as a nonprofit organization just about a year ago to expand those activities to include veterans with physical disabilities and psychological trauma.

It has received letters of support from all three members of Montana’s congressional delegation and from Gov. Steve Bullock.

It is also a member of the Professional Association of Therapeutic Horsemanship International, based in Denver, and is working toward obtaining “premier certification” from PATH, which would open the door to more funding.

Gatzemeier said the center is also getting closer to working out “affiliation agreements” with the Veterans Administration and the Billings Vet Center, so they can begin referring veterans to the program and providing mental-health support. He said the program is trying to establish a similar relationship with the Mental Health Center in Billings.

“We expect to grow this program fairly rapidly over the next five years,” Gatzemeier said. “The need is huge.”
He said the number of veterans in Montana has been estimated at 100,000, and if national averages hold, about 15,000 of them would have service-related disabilities. In the Billings-Yellowstone County area, he said, that would translate to about 3,500 veterans with service-related disabilities.

At the moment, the program has three certified instructors and five horses, with which they could handle up to about 100 clients a year. As the program grows, Gatzemeier said, it could add instructors by hiring from the pool of five to 11 students who graduate from Rocky’s equine studies program every year. Since 2006, Rocky has made therapeutic instruction part of its degree path.

Bob Crandall, a Vietnam-era veteran and member of the program board, has been mostly responsible for steering vets to the program so far, including six who underwent some equine therapy last summer.

Crandall has been in a wheelchair for 40 years with a service related noncombat injury, and though he hasn’t had equine therapy as such, he has spent a good deal of time at the center, partly to get the horses accustomed to being around people in wheelchairs.

He said he recently had the “very subtle realization” that he has benefited from spending time with the horses, having picked up “a sense of relaxation and comfort and a different kind of communication.”

Crandall, who has worked with a PTSD group at the Billings Vet Center, said a lot of veterans are wary of getting involved with programs affiliated with the federal government, for many different reasons.

“This program, in a way, reaches out to veterans dealing with that emotion and those feelings,” he said.

“This setting can be pretty quiet and reserved, pretty one-on-one,” Skelton said. 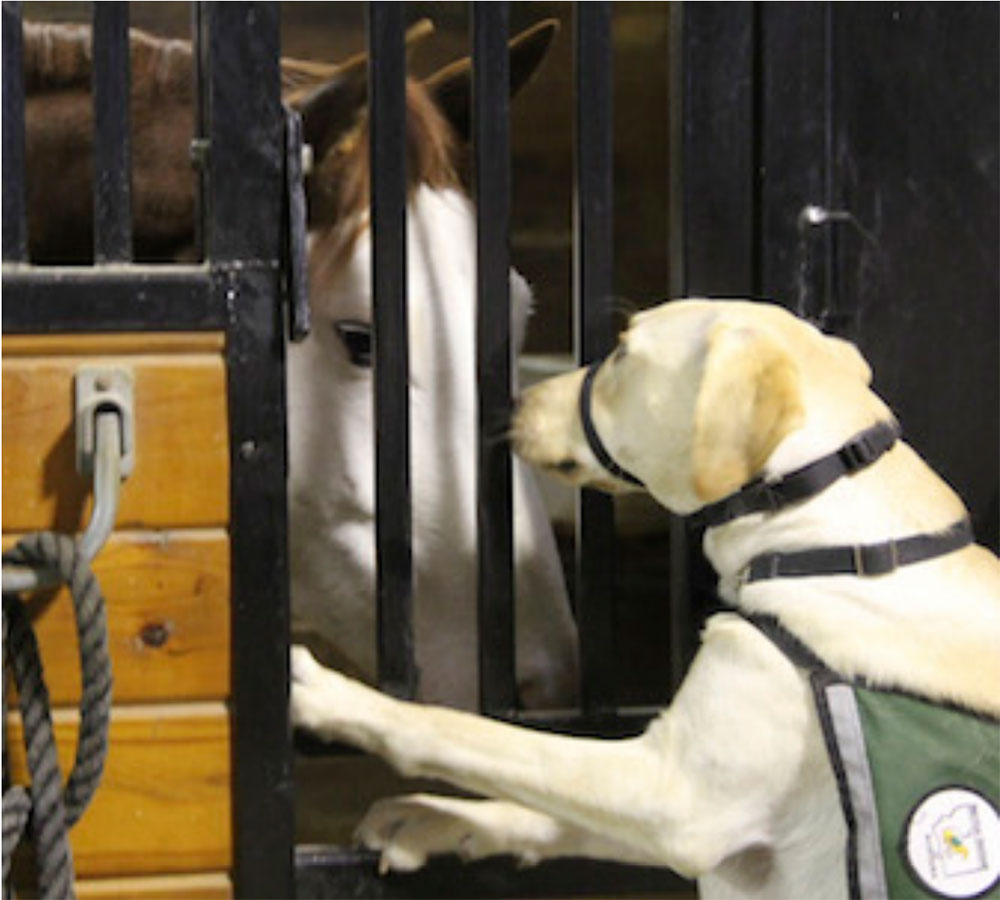 Jacob, who hasn’t been around horses much, was thrilled to have a close encounter with Moo.

Veterans can get involved with the horses in a variety of ways, from simply helping out around the stalls to active riding and horsemanship, Sampley said. For people with physical disabilities, the benefits of riding are many: better balance and posture, more core muscle strength and increased coordination and motor control.

Interacting with the horses, either by grooming, walking or riding them, can give people more confidence and independence, and a greater sense of self-esteem.

Gatzemeier said another goal of the program is to get Rocky and Montana State University Bozeman involved in research projects focused on equine therapy, and to use the center for MSU Billings students pursuing degrees in nursing, psychology and psychiatric rehabilitation.

Locally, the program is working with the American Legion, Disabled American Veterans, Youth Dynamics and Volunteers of America-Northern Rockies.

Anvia Hampton, one of the center’s certified instructors, who plans to graduate from Rocky’s equine studies program this spring, said clients involved in riding have to follow certain steps, gaining the skills needed for each level of horsemanship.

“Yes, there is a structure,” she said, “but we adapt it to meet the needs of our clients.”

It’s also been good for her. “This is a great project,” she said. “This is an unintentional senior project, basically. I love it.”